We are Many, We are One

One my favorite bits from the Bible is in this morning’s readings:

“…We are Parthians, Medes, and Elamites, inhabitants of Mesopotamia, Judea and Cappadocia, Pontus and Asia,

“Phrygia and Pamphylia, Egypt and the districts of Libya near Cyrene, as well as travelers from Rome,

“both Jews and converts to Judaism, Cretans and Arabs, yet we hear them speaking in our own tongues of the mighty acts of God.'”
(Acts 2:9–11)

A “noise like a strong driving wind” in the sky had gotten their attention.

Maybe they’d seen the “tongues as of fire,” too. Or maybe that was visible only to the disciples inside. Now that I think of it, a loud ‘whooshing’ sound in the sky and descending fire might easily have started a stampede.

Anyway, folks outside were puzzled, since they had been hearing what the folks inside were saying.

That’s not the puzzling part. I gather that Jerusalem in those days didn’t provide nearly as much acoustic privacy as we’re accustomed to. The decidedly odd part was that each person “heard them speaking in his own language.” Hence the roll call of nationalities.

The effect apparently was a bit like audio feeds for UN delegates: nearly two millennia before the United Nations Interpretation Service.

Under the circumstances, passing the whole thing off as an auditory illusion triggered by hearing drunken babbling wasn’t entirely unreasonable. (Acts 2:13–15)

You know the rest. Peter explained that he and his associates weren’t drunk. He said that something major had happened, starting with what Joel had written about:

“1 Then afterward I will pour out my spirit upon all mankind. Your sons and daughters shall prophesy, your old men shall dream dreams, your young men shall see visions….”
(Joel 3:1)

Jesus was the Messiah they’d been waiting for: “a man commended to you by God with mighty deeds, wonders, and signs.”

Then Jesus had been executed and buried.

Here’s where it gets interesting:

“But God raised him up, releasing him from the throes of death, because it was impossible for him to be held by it.”
(Acts 2:24)

That was about two thousand years ago. Folks are still adjusting to the news.

Some things have changed.

Phrygia’s land became part of Rome’s holdings about a century after the “tongues as of fire” event. Since then it’s been in the Byzantine, Seljuk, and Ottoman Empires.

These days, it’s part of Turkey; where Afyonkarahisar Province is, more or less. Someone else will probably be running the territory two millennia from now.

Even if Turkey retains its national identity, Afyonkarahisar ili and Türkiye will most likely be called something else. Languages change. Unless we have a really good reason for maintaining the exact syntax, grammar, and vocabulary of a particularly moment in time.

Rome is still a major city, but the last Roman Emperor died more than a dozen centuries back.

My ancestors come from lands beyond the old Roman frontier. I speak English, a West Germanic language that wouldn’t settle into something like its current form until Shakespeare’s day.

Some things haven’t changed, and won’t.

Those are part of natural law, ethical principles built into the universe. They don’t change. Positive law, rules we make to help us live in comparative harmony, can and sometimes must change. (February 5, 2017; November 21, 2016)

Something else that won’t change is the best news humanity’s ever had.

This is the message we’ve been passing along for two millennia:

What we do about it is up to each of us. I became a Catholic. 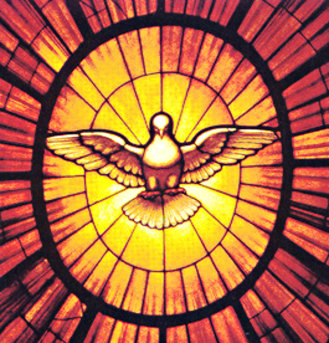 The Shavuot recalled in Acts 2 was our ‘grand opening’ — making our Lord’s message available to anyone who would listen.1 (Catechism, 731–732, 767)

My tool kit seems to include the expression of knowledge. (1 Corinthians 12:8)

We have several visible symbols for the Holy Spirit: including fire, a cloud and light, a dove, and a finger. (Catechism, 694–701)

Humans are intensely visual creatures,3 which probably helps explain why so many of our symbols are visual symbols.

Today, Catholics live on every continent except Antarctica.

Some visit that continent, as scientists or tourists. But nobody, Catholic or otherwise, lives there permanently. Not yet.

We speak Albanian, Brazilian, Japanese, Lebanese, and many other languages.

We have lived under emperors, kings, chairmen, and presidents. Sometimes our native leaders let us worship in peace, sometimes they don’t. Occasionally they try to take our Lord’s place.

We are “one in Christ Jesus,” united by the sacraments our Lord gave us: Baptism, Confirmation, the Eucharist, Penance, the Anointing of the Sick, Holy Orders, and Matrimony. (Catechism, 1210)

We celebrate these sacraments in many ways, reflecting our many cultures. (Catechism, 1200–1206)

Some aspects of Catholic worship haven’t changed, and won’t. Some keep changing, and this is okay. In fact, it’s a good idea. (Catechism, 1200–1206)

“…The mystery celebrated in the liturgy is one, but the forms of its celebration are diverse.
“The mystery of Christ is so unfathomably rich that it cannot be exhausted by its expression in any single liturgical tradition….”
(Catechism, 1200–1201)

That upsets folks who apparently imagine that being Catholic means acting pretty much like they do. They may really think that everyone — in all places and for all time — should worship exactly as they did in their home parish, a few decades back.

I’m sure they’re sincere. I’m also sure they are wrong.

Being Catholic means, or should mean, being part of a truly catholic, καθολικός, universal church — for all people; in every age, including those that haven’t happened yet.

Some of us, as centuries rolled by, have acted as if making “disciples of all nations” meant forcing one culture or political system down everyone’s throat. That’s a huge mistake.

We’re still cleaning up the mess left by the Verden massacre, and that’s yet another topic. (April 30, 2017)

There are, however, a few basic principles we should always observe.

It’s simple, easy to remember: and very hard to do.

As a Catholic, I’m obliged to take our Tradition very seriously. That doesn’t mean following every tradition we’ve accumulated over millennia. I doubt one person could. Not in a single lifetime. (June 2, 2017)

I can’t insist that everyone act just the way we did in the parish I grew up in.

I’m an adult convert, so my childhood memories include pleasant experiences in a nice, normal, mainstream Protestant church.

I take what the Church says about social justice and environmental concerns very seriously. That doesn’t make me a liberal, any more than seeing abortion as a bad idea makes me conservative. I’m a Catholic. (January 22, 2017; February 12, 2017)

I didn’t become a Catholic to preserve youthful ideals I developed in the 60s.

One more thing: Pentecost is also a traditional (lower case “t”) time for folks who are becoming Catholic to formally wrap up their entry procedures.

That can include a renewal of baptismal promises: something we’ve been doing during Mass in my parish over the last several weeks. I enjoy the review, and the “I do” responses.

I left those out of the text I copied from “The Renewal of Baptismal Promises,” since it’s the same for everything except the closing “this is our faith” thing:”

“Do you renounce Satan, and all his works and empty promises?

“Do you believe in God, the Father almighty, Creator of heaven and earth?

“Do you believe in Jesus Christ, his only Son, our Lord, who was born of the Virgin Mary, suffered death and was buried, rose again from the dead and is seated at the right hand of the Father?

“Do you believe in the Holy Spirit, the Lord, the giver of life, who today through the Sacrament of Confirmation is given to you in a special way just as he was given to the Apostles on the day of Pentecost?

“Do you believe in the holy Catholic Church, the communion of saints, the forgiveness of sins, the resurrection of the body, and life everlasting?

“This is our faith. This is the faith of the Church. We are proud to profess it in Christ Jesus our Lord.
((From “The Renewal of Baptismal Promises” Order of Confirmation, English translation © 2013, International Committee on English in the Liturgy, Inc. All Rights Reserved. Liturgy Office, England & Wales (www.liturgyoffice.org.uk/Resources/Confirmation/OC-Renewal.pdf (May 26, 2017))

The words during Mass are a tad different in our parish, but the ideas are the same.

“HOLY SPIRIT: The third divine Person of the Blessed Trinity, the personal love of Father and Son for each other. Also called the Paraclete (Advocate) and Spirit of Truth, the Holy Spirit is at work with the Father and the Son from the beginning to the completion of the divine plan for our salvation (685; cf. 152, 243).”
“PENTECOST: The ‘fiftieth’ day at the end of the seven weeks following Passover (Easter in the Christian dispensation). At the first Pentecost after the Resurrection and Ascension of Jesus, the Holy Spirit was manifested, given and communicated as a divine Person to the Church, fulfilling the paschal mystery of Christ according to his promise (726, 731; cf. 1287). Annually the Church celebrates the memory of the Pentecost event as the beginning of the new ‘age of the Church,’ when Christ lives and acts in and with his Church (1076).”
(Catechism, Glossary)

2 I am a Christian and a Catholic, so I worship God the Father, Son and Holy Spirit. That does not make me a polytheist. God is one. We don’t worship anyone or anything else, or shouldn’t. God is also three persons, and that’s another topic. (Catechism, 232–260)

3 More about being human:

I was born in 1951. I'm a husband, father and grandfather. One of the kids graduated from college in December, 2008, and is helping her husband run businesses and raise my granddaughter; another is a cartoonist and artist; #3 daughter is a writer; my son is developing a digital game with #3 and #1 daughters. I'm also a writer and artist.
View all posts by Brian H. Gill →
This entry was posted in Being Catholic and tagged baptism, charisms, culture, God, history, Holy Spirit, Jesus, law, natural law, Pentecost, positive law, salvation, Tradition. Bookmark the permalink.

3 Responses to We are Many, We are One