On this day in 1918, World War I finally ended. Officially.

It didn’t, of course. Communications in 1918 weren’t what they are today, and that’s another topic.

There was reason to celebrate, at least for the winners.

Folks in England, Belgium, France, the United States, Canada and other countries celebrated Armistice Day for a couple decades after 1918. We still do, although the name and meaning has changed.

I gather that the first Armistice Day celebration kicked off on the evening of November 10, 1919, in Buckingham Palace.

The next day, public Armistice Day events on the Palace grounds included a two-minute silence.

At the time, the idea was commemorating those who had died during the war, and those they left behind.

Now, in my country, November 11th is Veterans Day.1

“…Veterans Day honors all of those who have served the country in war or peace — dead or alive — although it’s largely intended to thank living veterans for their sacrifices….”
(“5 Facts to Know About Veterans Day,” Katie Lange, Here’s how you know, U. S. Department of Defense (November 5, 2018))

I think changing the name and purpose of the November 11th observance made sense.

The 1918 armistice was a significant event. But a great deal has happened since then.

The Treaty of Versailles, for example.

It Seemed Like a Good Idea at the Time? 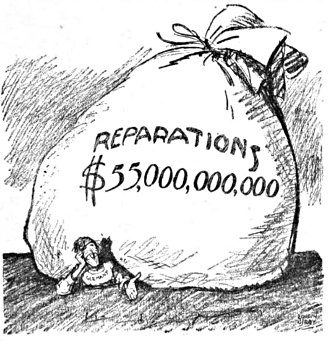 The Versailles Treaty’s massive reparations imposed on Germany, along with strict controls on Germany’s military, local urban and rural police, and forest guards — may have seemed like a good idea at the time.

To the folks in charge of England and France, at any rate.

To this day, some historians are big fans of the Versailles Treaty.

My opinion — seeing what happened after the Weimar Republic tried solving their financial problems with hyperinflation — is that punishing Germany and Germans for losing a war had unintended consequences.

Anyway, the Weimar Constitution’s Article 48 let the chancellor sidestep Germany’s legislature during emergencies. I figure this looked like a good idea at the time, too.

Then, in the early 1930s, a chancellor invoked Article 48. And a little later the second “War That Will End War” took off. Or the second phase of the 20th century’s global war.

That’s arguably why folks in various countries started calling November 11, or a date near that, Remembrance Day. Or Poppy Day.

The United States opted for calling it All Veterans Day, later shortened to Veteran’s Day.

For Poland, November 11 is National Independence Day. That’s because November 11, 1918, is when Poland stopped being divvied up between the German, Austro-Hungarian and Russian empires.2 That, I think, is something the Treaty of Versailles got right.

A remarkable number of us survived World War II.

An even more remarkable number seem to have learned from the 20th century’s debacles.

Some lessons had already been learned.

Tombs of an unknown soldier or soldiers, for example, go back at least to the 1865 Civil War Unknowns Monument. But now they’re an international phenomenon.

During the 1920s, several countries — including mine — built tombs for unknown soldiers who had been killed in what we now call World War I.

I think this is a big deal, since it’s a break from the tradition of monuments dedicated to war leaders. And focusing instead on the folks who fought their wars.3

“Here rests in honored glory an American soldier known but to God.”
(Inscription on The Tomb of the Unknown Soldier‘s west side. (Arlington National Cemetery))

My attitude toward the “honored glory” of America’s Unknowns is that of respect and regret, which doesn’t make me a “hawk” or a “dove.”

I can’t be either a pacifist or sabre-rattling jingoist. And that’s something I’ll talk about tomorrow, in my regular “Saturday” post.

“….But let no nation confuse our perseverance and patience with fear of war or unwillingness to meet our responsibilities. We cannot save ourselves by abandoning those who are associated with us, or rejecting our responsibilities.
“In the end, the only way to maintain the peace is to be prepared in the final extreme to fight for our country — and to mean it….”
(Remarks by President John F. Kennedy, Veterans Day National Ceremony, Arlington National Cemetery (November 11, 1961) via va.gov)

“…On that day let us solemnly remember the sacrifices of all those who fought so valiantly, on the seas, in the air, and on foreign shores, to preserve our heritage of freedom, and let us reconsecrate ourselves to the task of promoting an enduring peace so that their efforts shall not have been in vain….”
(Proclamation 3071; Veterans Day 1954; By the President of the United States of America; Federal Register, Volume 19, Number 198 (October 12, 1954) via va.gov)

I was born in 1951. I'm a husband, father and grandfather. One of the kids graduated from college in December, 2008, and is helping her husband run businesses and raise my granddaughter; another is a cartoonist and artist; #3 daughter is a writer; my son is developing a digital game with #3 and #1 daughters. I'm also a writer and artist.
View all posts by Brian H. Gill →
This entry was posted in Discursive Detours and tagged history, holidays, Veterans Day. Bookmark the permalink.